This is from an interview done with Irvin.  The interviewer gave Irvin the chance to correct and add to the original interview.

Irvin:  “I started when I was 10 years old. My dad showed me how to carry a design.  He didn’t draw pictures. He didn’t have sketches when he did his weaving, and he didn’t take pictures of his weavings to document what he had woven. So I had no source of design other than verbal instruction from my father. That led me to look into Navajo books because I could not find any books on Hispanic weaving. There was very little written about Spanish weaving. There was usually a one-page description to compare Spanish weaving to the Navajo weaving.

When I got older, I started to wonder. I said to my Dad, “You’re a seventh generation weaver–what did these other generations do?”

And he said, “Well, my grandmother’s pieces were striped.”

And they were in the crib in the next room when we stayed at my grandmother’s house, and my aunt would put it on us as a blanket during the winter.  These are simple, striped, hand-spun pieces.

There was a book published in 1976 called The Spanish Textile Tradition of New Mexico and Southern Colorado. This opened my eyes to the Saltillo serape’s influence, which I hadn’t seen before. Another great influence on my weaving has been the Spanish Market, a crafts fair started in Santa Fe in the 1930’s, which encouraged the use of hand spun and natural dyes in weavings, and other Spanish Colonial crafts. The Spanish Colonial Art Society in Santa Fe revived the market in 1965, and my father was invited to show his weavings because they knew him from when he taught as part of the WPA project in the 1930’s. I started to show my work with him at the Market in 1976 and I was able to see what other weavers were doing.

After getting married to my wife Lisa in 1982, we decided to become professional weavers and open up our own weaving studio. We started studying Rio Grande weavings in museum collections. We participated in the repackaging of the weavings, probably about 200 pieces, at the Museum of International Folk Art collections in Santa Fe.

Lisa and I started to look at other museums to see what their collections had. The Southwest Museum in Los Angeles, the Heard Museum in Phoenix, the Taylor Museum in Colorado, the Albuquerque Museum, the Museum of Anthropology at the University of New Mexico, the School of American Research in Santa Fe, and many others. What we saw is there wasn’t one design reproduced over and over. There were individual weavings made by unknown artists. It led us to study their forms, how they developed the design ideas, materials and finishes. Not necessarily copying the designs exactly, but taking notes for ideas. So that kind of helped us to start designing more complex pieces. We started to explore these influences in our weaving. 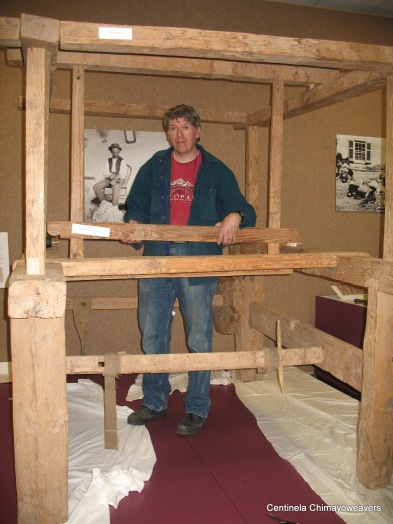 We got to help curate a Rio Grande textile exhibit for the Albuquerque Museum and Lisa and I we were able to make comments on the pieces that would be is exhibit.  The comments showed up in the catalogue of the show.  There, I also helped them put together an old loom which was basically a bunch of sticks in a box. From my knowledge of looms, I got to put it together and I wrote a procedure for putting up that loom for the museum. The study of looms is an ongoing interest of mine. I’ve constructed looms and seen different details found on looms that I’ve helped people put together and get working. This has been in general, not just in museum owned looms.”

There are some other things Irvin would like people to know about him.  One is that he is a drummer.  He probably would’ve liked to have been a professional drummer, but that hasn’t ever been offered to him.  So he’s been drumming with all kinds of different bands playing different kinds of music.  He has tried his hand at doing the recording and mixing side of the process too.  His work as a drummer and his work as a weaver don’t often have much of a connection, but once we held a party here in the shop, with music.  So we have this wonderful picture.  And a few CD’s from projects that he has been involved in.

The fact that he’s an engineer is also important.  He worked as a civil engineer for the Corps of Engineers in Albuquerque after getting his Bachelors of Science degree from the University of New Mexico in 1979.  He actually got his Professional Engineer’s license in 1983.  Although he gave up the PE license years ago, Irvin continues to engineer things for Centinela.  Our warping systems and the giant loom we have here in shop are both engineering accomplishments, as are his various sets of architectural drawings over the years for our house and shop and sheds on the property.

His drumming and engineering education and skills are integral parts of who Irvin is and how he weaves.   They might seem like three very different kinds of thinking.  All of these things are mathematical and logical with room for great creativity.