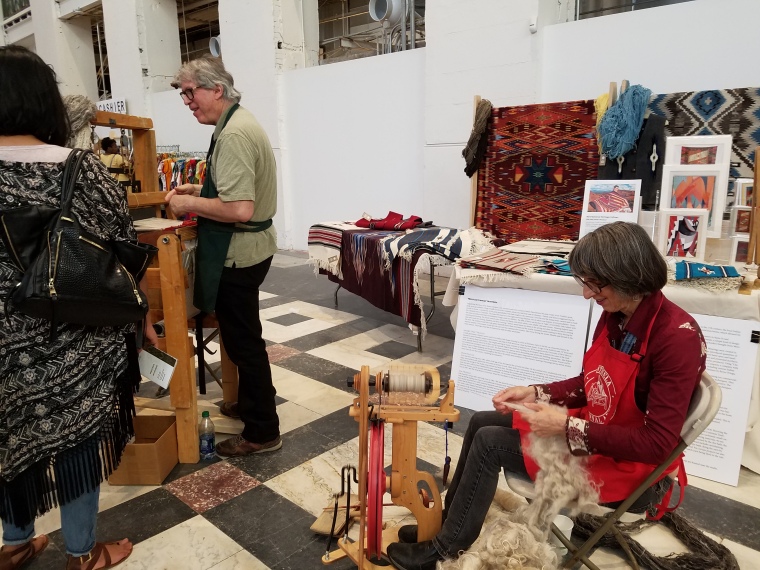 We were honored to be invited to participate in the Smithsonian Folklife Festival in the Arts and Industries Building on the National Mall in Washington DC.  We shipped a loom out for Irvin to weave on, but they borrowed a wheel for me that is just like the one I use at home.  I also brought a couple of scoured churro fleeces to spin during the weekend we were there.

Most folks don’t seem to know what spinning is,  what weaving is,  or what a spinning wheel or loom is.  People thought I was making thread, or maybe rope, working silk, weaving, knitting, or sewing.   For some reason, a number of people thought the churro wool looked like alpaca fiber.  Since these processes and tools are so removed from day-to-day life,  I guess this is all understandable.  Irvin was right by me, weaving, so at least I could point out the loom and ask them to observe the weaving process. All of this makes me think that fiber folks should be out in front of people more often.

There were, however,  people whose nostalgia about wool and spinning and looms very much affected them.  People with family or friends, or long-ago-and-far-away histories, that involve these things.   The mother and daughter from Thailand, the lady from Ethiopia whose family wasn’t privy to weaving or spinning skills, but who maybe she wished they had been.  The lady from India who was learning all about sprang.  People who really wanted to learn to spin.  Knitters and weavers who think maybe they’ll spin one day.   And some people who were just enthralled by the wheel and the seemingly magical process.

But the kids were the most fun.  The little ones were down at my level.  Some kids are too shy to speak to a stranger about that mysterious thing I was doing.   Lots of kids just stared.   There was a lot of confused information given to them by parents who wanted to explain things but didn’t really know themselves.

Some wanted to try it out.  (Uhh, might be frustrating for both of us.)  Some tried to touch the wheel while I was spinning.  (No way! That’s just dangerous.)  I let them feel the fleece, which looked a lot softer than it felt. That was when parents would touch too,  which was great.

My favorite kid encounter was with a boy who was maybe four or so, whose jaw dropped and   eyes shone.  He loved what he was seeing.  I like to think that somehow spinning is kinda magical and that’s what he was thinking too. He came back a couple of times, and made me very happy.  There’s always hope when that kind joy exists in the world.

← On Planning Things Out
Emily’s Triforce →