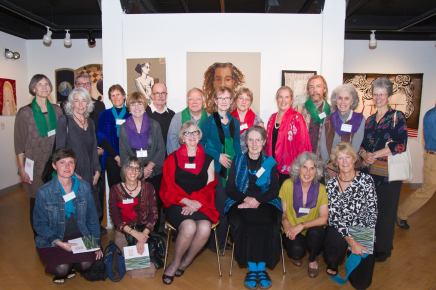 We are honored to be participants in an exhibit called “The Art is the Cloth”.  The opening at the New Hampshire Institute of Art was attended by 20 of the artists in the exhibit, whose smiling faces you can see in the above picture. It is a tapestry show meant to explore that central reality of tapestry, that we aren’t manipulating a piece of cloth to create our art, we are creating the cloth as we create our art form.    There are a few other components of the art form that are pretty much a given, i.e. warp and discontinuous weft threads.  But beyond that, we are clearly thinking differently about how we approach this art form.  We saw tapestries made from all kinds of different fibers, variations on thicknesses of yarn, and every color imaginable.  The exhibit was divided in an appealingly logical way.  But I’ve been thinking about it differently, about how these tapestries diverged from my comfort zone, or didn’t.  Which is to say, why would or wouldn’t I have woven a piece like that?  So I thought I’d share my thoughts and see if I can learn anything about my own thinking/philosopy on tapestry weaving.

Rectangles and the Perpendicularity of warp and weft-.  The two groups of weavings that have “eccentric” weft are the wedge-weave pieces and the 3d ones.  And when you do these things you leave behind the familiar rectangle that most of us weave.  The rectangle is the natural way things come off of a loom.  But some of these pieces had edges that followed angles and curves, and a couple were particularly three-dimensional.  Although Irvin has a piece here in the shop that has a stepped bottom side, neither of us has purposely done anything much that isn’t a flat rectangle.  There is a logical reason for that, because the equipment we use constrains the side-to-side movement of warp yarns.  We’d have to abandon the use of the reed/beater to do most of the not-flat, non-rectangular possibilities.  There’s infinite possibilities in the non-rectangular world, but I’m not sure that I’m particularly curious about what lies out there.

Weft-faced-Almost all tapestries are weft-faced.  There weren’t many exceptions to that in the show, but Irvin and I have both tried out tapestry in the context of twills, but haven’t pursued that idea much.  A balance weave could also easily accommodate tapestry, and there was a gorgeous example of that in the show.  Still, having warp visible means all weft yarns have to blend with the warp color/s and that will actually limit color use pretty significantly.

Story-telling-Story telling is definitely a long-standing part of tapestry tradition.  Maybe it’s even an inevitable part of tapestry weaving.  After all, tapestry weavers are artists and have lots to say about things, and they have plenty of time to think about what to say while they are executing this slow process.  All of the 20 weavers present at the opening spoke briefly about their piece.  Some of them actually weren’t so brief in their presentations.  Some of the pieces had a lot of images and clearly were meant to show a passing of time, others depended on symbols and other elements to communicate more than just a pretty image or simple idea.  I suspect that none of the pieces there were devoid of meaning to the weaver, although a passing observer might not recognize the content.  A tapestry’s ability to communicate what the weaver intended is dependent a lot of things the weaver can control, and a lot that they cannot.  In this way, tapestry is like other art media.  Observers need to put some effort to see a story, or they may just see something visually appealing.  Or not.

Design medium-This is, I think, where I have some strong feelings.  People ask us all the time about how we come up with designs for our pieces.  Actually, what they ask is “where is your pattern”.  I’m not entirely sure what the underlying assumptions are for the people that ask that question, but they tend to be surprised when we tell them that we don’t have a “pattern” to work from.  And most tapestry weavers certainly don’t work from a “pattern”.  What they might use is a “cartoon”.  A cartoon is a plan for the tapestry weaver to execute to create a specific image.  Conceptually they are like a “paint by number” thing, with outlines of color areas being specified in a drawing.  That reference, the “cartoon” is kept at hand in a variety of different ways, depending on looms and personal preferences.  Executing the cartoon’s design takes a great deal of  skill, and designing the cartoon can be separated from the weaving process.  In fact, historically, these things were entirely separated.  Modern tapestry weavers tend to do both design and execution of the piece.  The design medium can be paper and pencil, paints, charcoals, collage, Photoshop…whatever.  And sometimes it’s kind of obvious that the design came from a different medium.

And my feelings about that are kind of mixed.  I want tapestry to be true to its own medium.  A part of me believes that tapestry shouldn’t look like watercolor or photography or collage, because the result of it being woven isn’t necessarily a step up from the original rendering.  After all, watercolors, photography or collage are lovely art forms in their own right.  But tapestry is time consuming.  And it conveys a depth of color and texture that other art forms don’t.  And it’s cloth, which we humans have a very special relationship to.  I’m sure that the weaver feels that the tapestry is well worth the effort they put into it or they wouldn’t do it.  But I think that what we produce from our looms ought to be true to the process of weaving first and foremost.  So I’m happy with my process, which rarely uses any medium beyond occasional sketching things on paper.  My process is very much about all kinds of variations of logic and math and color and energy.  And I’m happy with that.  It feels true to me, and to my loom and to the cloth.  I want to explore more about my own process in future posts, because I really want to clarify what it is we do.  I hope very much that what every weaver sent to that show is true to them and their process.  And we all grow and change and our design and weaving processes grow and change too.  Which is an apt analogy for tapestry weaving…it grows and changes as we lay our bits of colored weft into our warps.  And beautiful things come out of it.