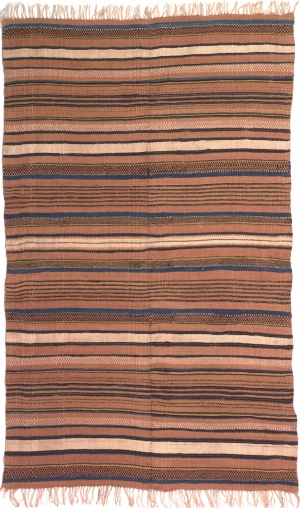 The five thousand or so churro sheep that came to New Mexico with Coronado’s expedtion in 1540 were too valued as food to these original settlers to survive and become established flocks in the new territories. New Mexico proved to be a hospitable place for churro, and the sheep thrived to become an important part of the Spanish colony’s economy. Wool in an unprocessed form would be too difficult to transport (other than on the backs of sheep) to be of value as a trade item. Blankets, however, were in great demand by surrounding trading partners, and by 1840, records show tens of thousands of weavings traded out of New Mexico. Of course, they were used in New Mexico, to ward off the cold of mountain nights, and, in early years, as a wearing blanket. Domestic use as well as those for commerce caused a substantial industry to develop, employing sheepherders, spinners and weavers. Although there was a variety of woven goods produced as part of this trade, the single item in greatest demand was what came to be called the Rio Grande blanket, a general term encompassing the entire weaving tradition of Hispanic New Mexico. 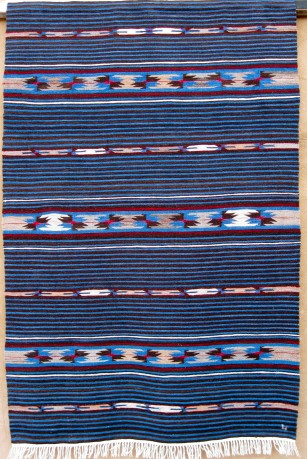 More specifically, it describes a weft-faced, striped blanket, longer than wide. They are woven on a European floor loom with the weaver standing at the loom, his weight on the pedals serving to open a path for the shuttle. Before the industrial revolution brought metal reeds (the comb part of the loom) to New Mexico, handmade reeds limited the width of the looms to roughly 30 inches. A suitable blanket width was achieved by a double weave using four harnesses, essentially weaving a folded blanket leaving a telltale center ridge; or two pieces sewn together with a center seam.

The Saltillo serape employs the two-pieces-seamed approach. These incredibly fine and detailed tapestries were produced under the auspices of the wealthiest landed hacenderos in Mexico. As these weavings became a source of great national pride in Mexico, weavers here in New Mexico emulated their southern counterparts. What was woven here is much coarser, but follows the style of a bordered rectangle with a serrate diamond in the center. Rio Grande Saltillos demonstrate great variety in design, seldom adhering to any formula. The Mexican Saltillo is the likely source of the use of tapestry in Rio Grande weaving tradition, which resulted in the inclusion of Saltillo-type elements introduced between stripes becoming a distinctive style in Rio Grande blankets.

“Grape and Lime” includes all of Lisa’s favorite Vallero characteristics.

The first style that actually develops here in New Mexico is a form evolved from the Saltillo. It adds an eight-pointed star element to the Saltillo’s vertical border and central diamond. This becomes a distinct style called Vallero. This development takes place in the mid-nineteenth century, as Americans first come to the area. The star may have been copied from American quilts, or perhaps derived from old Moorish architectural elements. Vallero weaving evidenced the impact of the industrial revolution, as commercial Germantown yarns and synthetic aniline dyes were adopted by local weavers. As a result of the availability of brighter colors, Valleros are typically very vivid, unlike the more sedate colors produced by natural dyes used earlier. 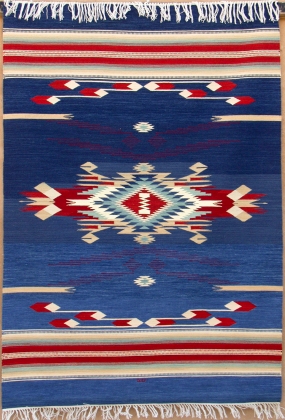 Other changes began to make their way to New Mexico as well. New breeds of sheep were introduced that were more productive meat and wool producers. Their wool, however, was difficult to spin resulting in a somewhat lumpy effect. Milled lumber made looms less bulky and metal reeds made a wider loom possible. In 1880, the railroad brought cotton “string” warp and commercially spun wool, making spinning unnecessary, but the finished piece was less durable with a cotton warp. Most threatening for the Rio Grande weavers was the train’s cargo of mill-woven blankets, making their cottage industry largely obsolete.

Of course weavers still wove. They wove to produce blankets for their family, as Irvin Trujillo’s grandparents did. Before long curio dealers in Santa Fe put their skills to use and a new industry developed, weaving the Chimayo style. Begun in the early years of this century, this style is basically two stripes and a center design. The stripes are clearly derived from the Rio Grande blanket, and the center design is an outgrowth of Saltillo tapestry techniques. Along with a uniform texture obtained by the use of commercial yarn obtained from a standard source, the style becomes distinct, recognizable. A commercial wool warp replaces the inferior cotton warp. Sizes in the industry become standardized and over the years new products develop.